What is Insulation film?

Ajinomoto Build-Up Film® (ABF) is used as an insulating material for high-performance semiconductors (CPUs), which are the heart of personal computers. ABF currently boasts a share of nearly 100% of the market for Insulation film used in major personal computers worldwide.

Have you experienced these issues?

Here is the product that resolves these issues.
Ajinomoto Build-up Film® (ABF)

Compared with liquid coating materials Yield loss due to bubbles and irregular printing during liquid resin coating can be eliminated. Solvent is not volatilized, nor is the working environment degraded. Both sides can be processed simultaneously, resulting in high productivity and preventing problems caused by the warping of thin sheets. Surface smoothness is superior, and film thickness is easy to control.
merit
Part1

Compared with photo-via materialsSuperior freedom in design
When stacking multiple insulating layers, via processing can be accomplished not only between layers 1-2 but also between layers 1-3.
merit
Part3 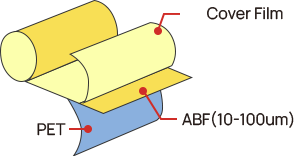 After lamination on the substrate, the wiring is formed through various processes.